Jobs such as “UI/UX Designer” are often advertised in France and some other countries – but you should think twice before applying even if you have a background in visual design. They may indicate that the company misunderstands UX or doesn’t really value it enough.

The real definition of UI

Before I tell you what’s wrong with these types of jobs, let’s remind ourselves what User Interface really means. UI is the medium through which the designer can communicate options to the user, and for the user to reply with their choices.

Usually it is a visual medium – Text, images, and buttons etc on a screen, but often it is non-visual, like when you phone an automated service and listen to the options, or feel vibrating feedback when you press a button on your touch-screen phone.

That’s why the image below of the user interface makes sense – It’s about dialogue and communication, not just visual design. 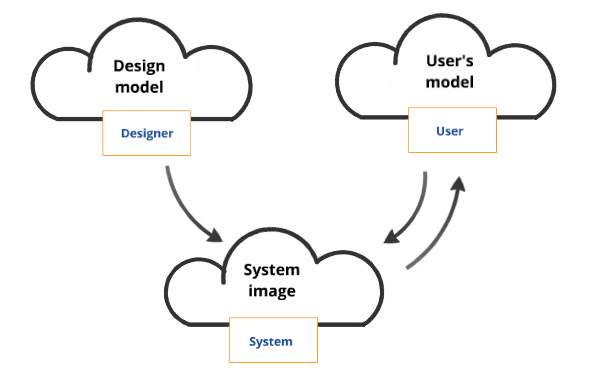 When you see UX jobs advertised with “UI” or “designer” in the title, such as “UI/UX designer” what they usually mean is they want someone who is primarily a visual designer, but with an appreciation of UX – Someone that can work on a GUI or Graphical User Interface.

They’ll usually want the candidate to work on websites or software which will be used by the general public. They’ll need to compete with other sites or products on the open market, with a very polished, professional-level visual appearance – so the primary skill HAS to be visual design.

Why this is a problem

Visual design is too important to leave to a half-time person, and so it is with the UX strategy, analysis, and prototyping which serve as the foundation upon which the visual design will rest – not to mention the testing and other research methods needed to refine a product.

Furthermore, placing UI as equivalent to UX in a job title is a red flag – UI is a component of UX – and in fact when done well, UX will deal with the totality of the user’s experience with a company, service, or product, from website to in-store customer service.  When the ‘UX’ work is targeted solely on the UI, you end up with a broken experience, as I wrote about when I was an Orange customer.

Now, of course it’s good for the visual designer or any other team member to have an appreciation of the whole of UX so they can work well with others in the team, or even do some parts of other closely-related functions.

But when you go further than that – when you want a UX Unicorn to handle everything, you get these problems:

Why these jobs are advertised

The fact that these job titles exist is due in my opinion to one or more causes:

So jobs like “UI/UX Designer” ring all these alarm bells for me, which is why I steer clear of them, and that’s why you should too.

Situations where having a combination UI/UX designer might be acceptable

I can think of some jobs where the visual design burden will be low enough to allow you to do the other vital UX work, like hosting workshops or testing prototypes with users:

If you are a UX professional or UX recruiter, let me know what you think in the comments below, especially if you disagree!